I have been racking my brains as to what my first blog post writing for Enfants D’Azur would be about and today I found it!!!.

Annie the original film, released in 1982 was one of my absolute favorite films growing up! I must have watched it at least 100 times much to my little brothers’ horror. And I still remember the words to the wonderful songs like “It’s A Hard Knock Life”, “Dumb Dog” and probably the most famous “Tomorrow”. So when I found out that the musical will be coming to Monaco in November 2015 I just knew that I needed to blog about it.

Annie is a “rags to riches” family comedy about a bright precocious little orphaned girl with red hair called Annie. Set in the 1930’s, in an orphanage run by the cruel Miss Hannigan, where the children are forced to scrub the floors on their hands and knees. Annie is determined to find her real parents who she believes left her at the orphanage by mistake. She makes several attempts to escape including hiding in a basket of laundry but she get caught and brought back to the orphanage each time. Her luck starts to turn when a rich billionnaire “Daddy Warbucks” is convinced by his personal assistant “Grace” to invite an orphan to spend Christmas with him in his big home in order to boost his image. Annie is selected from all the children in the Hudson Street orphanage. She is even allowed to bring her dog “Sandy” with her who she rescues during one of her failed escape attempts and whom the the mean Miss Hannigan had threatened to send to the saussage factory.

Everyone loves Annie so much in the Warbucks household that she is invited to stay forever. But Annie refuses, saying that all she really wants is to find her real parents. So Warbucks spares no expense and lauches a search for the parents offering a $50,000 reward. When Miss Hannigan’s brother and his girlfriend Lilly hear about the search they convince Miss Hannigan to help them. Together they hatch a plan to pose as Annies real parents in order to make off with the reward. It is the other orphans who find out what Miss Hannigan has done and escape to tell Warbucks the villans plan to drown Annie and split the money 3 ways. When Daddy Warbucks realises he has been bamboozled he orders his household staff to help him rescue Annie. A lovely film with a happy ending!

The original broadway production of Annie premiered in 1977 and was orignally based on a cartoon strip by Harold Grey called “Little Orphan Annie” which he started in the 1920’s. 1997 saw the Broadway revival. It was a huge success. There was even a remake of the film last year in 2014 starring Jamie Foxx, Quvenzhané Wallis, Rose Byrne, Bobby Cannavale, Adewale Akinnuoye-Agbaje, David Zayas and Cameron Diaz.

So when is the Musical coming to Monaco you ask? 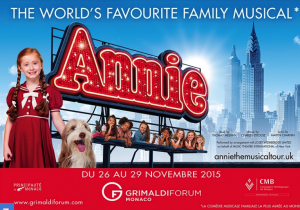 Well you are going to need to be quick if you would like tickets. There are only going to be 4 showings and they are already selling tickets even though it is not happening until the 26 – 29 November 2015.
So if you are a die-hard Annie fan like me make sure you buy your tickets as soon as you can.

TICKETS are available from the Grimaldi Forum

Don’t miss it! You are going to absolutely love it!

Here you will find a teaser posted by the Grimaldi Forum on You Tube for the event:

​
In preparation for singing along to the songs at the show or just simply to take a trip down memory lane, you can listen to some of the Songs from the Musical here on spotify: (as posted by the Grimaldi Forum)