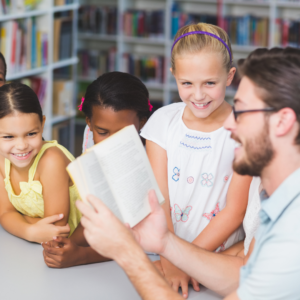 From the 6 to the 7th of February 2018, its the time for the little one’s to have a literature festival of thier own. The mediatheques will be offering activities and workshops for babies and very young children from 0-3 years old.

– Early Learning Games
For very young children from 0-3 years old in partnership with the ludothèque L’Escale-  Treasure island (MJC L’île aux trésors.)
From the 6th to the 17th of February during normal opening hours.

– “Music, Singing & Rhymes with finger counting songs” workshop by Sylvie Nanni
“One morning Albert decided to change, he set off and he found  a lovey bouquet of songs and stories which mingled and intermingled. Whoever hears such a lovely sound will go to heaven it was his mute grand father who told him that.”
Duration : 25 minutes | from 1 years old
Thursday the 8th of February 2018 in the Médiathèque des Semboules for crèches and primary school classes.

An operatic performance all about gravity, questioning weight, attraction, repulsion and propulsion. The character invents an anti-gravitational machine within a set designed out of of cubes, bricks which are far from stable and spoons… Is the sky falling !  A musical poetic operatic fun show for very young children. Directed by: Sandrine Le Brun Bonhomme | Musical Creator : Hélène Weissenbacher | Singer and comedien : Véronique Navarre. Duration: 25 minutes | from 1 years old
Saturday the 17th of February 2018 at 10am in the auditorium, level 0, Médiathèque Albert Camus d’Antibes.

Please sign up to avoid disappointment at Espace Jeunesse

You can see the full program here on antibes-juan-les-pins.fr

Other Médiathèques in the region are also participating. For example in the Médiathèque in Biot and Valbonne have a lovely cinema and snack event. 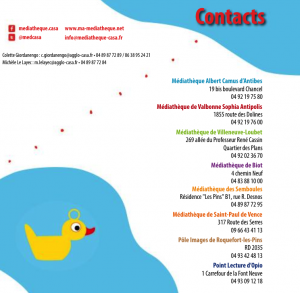