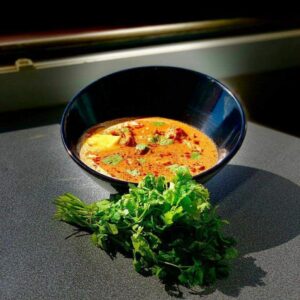 My Philosophy on Indian food put simply: less is more.

Have you ever tried to cook your favourite curry? So you searched your favourite chef’s recipe and found their version of the classic Chicken Tikka Masala or Butter Dahl curry (for you veggies), or you even purchased a great Indian cookbook, looked at the recipe and found at least a full page of different ingredients and spices? Even as a chef who loves to cook and spend time in the kitchen, I usually just close those sorts of books and think to myself “Yeah, I’ll just order in tonight”. As we have so many picky eaters in the world, it sometimes restricts us, chefs, from using the best ingredients. I have met a great deal of people who can’t stand eating chicken off the bone; this leaves chefs using chicken breasts, which doesn’t give maximum flavour and can dry out really easily when cooking.

So I wanted to put a stop to it. Not out of arrogance but because my dream is to create the best dishes, so I am going to use the best produce that will give you maximum flavour. But it doesn’t stop there, I can’t create the best with just the produce. I’ve had to learn for myself the best methods to get the most out of every ingredient that I use. Once I chose the equipment I wanted to use, (my 200 kg Tandoor oven), I then had to learn how to work one; controlling the heat of the Tandoor, how to cook meat in something that can heat up to 400ºC without it getting burnt (whilst not getting burnt myself). Then comes perfecting the recipe. So I asked myself: How can a British man perfect Authentic Indian food?

I’ve been blessed to cook alongside native Indians and Sri-Lankans when traveling all around Sri-Lanka where I understood that Authentic Indian food is nothing like the British curries we get in London and Birmingham. No matter where I go, I always get someone come up to me and say that my food isn’t proper Indian food because it doesn’t burn your tongue, leaving you sweating out, and drying your tears with a serviette. I have found that what makes a “proper curry” to some Brits has nothing to do with flavour, taste, and texture. It’s just a dish they use to show people how “macho” by ordering and eating the hottest curry they can find. They don't seem to be able to handle my homemade chili sauce though and that’s always fun to watch! Some people believe a curry has to have a lot of spices in it to make it a curry or taste exotic. The truth is, a curry can be whatever you want it to be, as long as you enjoy it.

For me, curries aren’t just about flavour, they are about the whole experience. I personally enjoy food much better when I understand how much love and passion has been put into making it. When you watch Indians cook, they create a great atmosphere whether they’re cooking at home, in a restaurant, or on the street. You see the way they pour the ghee in that smoking hot pan on top of an open fire. If you look closely they aren’t just throwing everything in at once and *bang* you have a curry. No, they add things in at the right time in the right order. You'll see that they only have one or two dish options because they have perfected those dishes for generations. This is what I wanted to bring to the South of France: passion, love, theatre, an exciting atmosphere whilst giving you The Authentic Taste of India.

In India, the best food originates from what the poor people cook to survive. They can't afford a page full of spices and ingredients that you would see in your average recipe book. In fact, they wouldn’t really have names for their curries, they would just call it a lamb, chicken, or chickpea curry. Depending on what they have available, they would make it hot, sweet, mild, dry, or in a Masala sauce. I’ve also had the help of my dad, whom I have crowned my “official taster”, as he traveled India for five months in 1978, way before it became a tourist and commercial hotspot.

Throughout those five months, all he had was Authentic Indian food cooked by the locals themselves. Every single Indian dish I have cooked, be it curries or street food, he’s tasted. And if it wouldn’t take him back to India or if it gave him the feeling that the Indians would be insulted by what I created (even if it was good), I would try again and again until the day would arrive, when he would take a bite, close his eyes, smile and say: “That takes me back, that is proper Indian food”.

Another factor when eating from Harry’s Tandoor is that I encourage people to eat the Indian way… with their hands, without cutlery. Eating with your hands enhances the flavours. Cutlery changes the taste of your food when using silver, metal or even biodegradable cutlery. Of course, it’s not for everyone so cutlery is always provided at my events, but if you are looking for a complete Indian experience, I recommend eating with your hands.

I have mastered the way of getting the best out of each ingredient to get maximum flavour using a griddle pan or barbecue.

Here are some tips: Don't cook the meat all the way through on the barbecue. Simply caramelise it to get the flavours of the barbecue, which will then also be incorporated into your Masala sauce. Cook slowly it until it falls off the bone. If you follow these tips the meat will literally fall off the bone. Moister than an oyster!

Author: Harry Strouthous, Private Chef and owner of Harry's Tandoor offers private events in your home, in form of a buffet or fine dining, or puts on Indian Curry Nights  in venues across the Languedoc and Côte d’Azur region. If you have room for his Tandoor, and you’re brave enough to get involved he can create a very special and unique experience.

Posted in DINE OUT