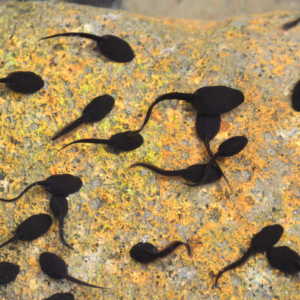 Have your children ever wondered how a tadpole turns into frog?

Spring is a great time to be outdoors with your kids. The weather is already warm this year and there are so many opportunities to see and observe nature and animals in their natural habitats on the cote d’azur. Spring is the traditional time for tadpoles, and even if you do not have a pond of your own in your garden there are plenty to be found during a trip to a local pond or river. L’Etang de Fontmerle found at Le Parc de la Valmasque in Mougins is one example where the pond is teaming with life right now and there is a lovely decking area where kids can safely use their nets to scoop up frog spawn or little tadpoles. (See our EnfantsD’Azur entry for Le Parc de la Valmasque L’Etang Fontmerle)

We don’t have a pond in our garden but we do have a “Bassin” on the terraces. A traditional round structure found on the terraced gardens in this area which collects rainwater and can then be used to water the orange and olive trees. At this time of year we start to hear the frogs making their familiar croaking sound meaning the bassin will be teaming with life including frogspawn & tadpoles.

So one day during the school holidays we prepared the nets, some jam jars and we set off down the terraces to the bassin to take a look inside. We had fun watching them swim in the murky water. It was easy to catch them with the nets because there were just so many of them. We had full jars within minutes and very eager children happily watching them swim in the jars. Handling them to look at them closer up and feel their slippery wet skin.

My kids aged 2,7 and 12 were having so much fun and asking so many questions about how the tadpoles actually turn into frogs that we decided to run our own hands-on experiment to find out.

First we found a container suitable to make a little habitat for our tadpole experiment. Ours was an old large cement-mixing tray, which was washed and cleaned out, but you could use a fishbowl, a plastic container, an aquarium or even transport your spawn or tadpoles back to your own pond if there are none in it already. 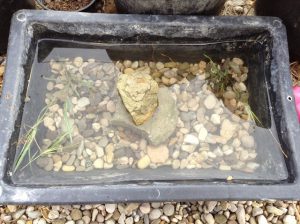 We found a shady space in our garden, which was easy to access so we could visit the tadpoles every day to observe any changes and to care for our baby frogs. We used water from our basin where we found our tadpoles so that they were in familiar water and we changed it every few days to make sure there was enough oxygen.

The kids arranged the gravel, found some rocks so that, as the frogs metamorphosed through the different stages, they could climb out to breathe. My 7 year old loved the way the word metamorphosis sounded, repeating it several times to feel the word on his tongue, and my 12 year old was quick to explain to his brother and sister how that meant that; the tadpoles change slowly by growing feet at the back then the front then losing its tail to be come a frog. We also talked about how there are some creatures who live on land like humans and cats and dogs, some that live in the water like fish and some who can live in both like frogs. This led to a discussion about how the tadpoles needed oxygen to breath even though they were in the water. So they found some long grass pulled it out by the roots, washed off the soil and buried the roots in the gravel to help oxygenate the water. It looked lovely too like a mini pond. They were really proud of their efforts. Once it was full of water we transferred the tadpoles from the jars into their new home.

Later on that day, my 12 and 7 year olds used the their ipads to look for information about keeping frogs. They were given 2 things they needed to find out about online:

1.The lifecycle of a frog – what are the stages?
2.What do frogs eat?

This is what they found out that:

1. They liked this diagram explaining the lifecycle of frogs (original image source) 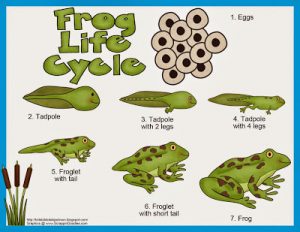 2. They found out that the tadpoles can eat foods such as lettuce, algae and pond weed but that you can also buy food for tadpoles from a local pet shop but we did not go and see if this is actually the case here on the cote d’azur. Though it is available on Amazon.

While they were doing this, my 2 year old was being entertained by a lovely educational episode of Ben & Holly’s Little Kingdom on YouTube which I found by accident about tadpoles and frogs:

Over the next 6 weeks we watched them grow into fully-grown frogs. Here are the pictures we took at some of the most interesting stages:

Because our habitat was open, once our frogs developed their back legs, the majority of them crawled away before the final stage of metamorphosis. Only one of our tadpoles stuck around long enough for us to see a fully formed frog. He was so tiny at about the size of an adult middle finger nail. He let us hold him briefly before we released him back into the bassin where we originally found him. He may even go on to complete the life cycle and reproduce so we have more tadpoles next year.

This activity is suitable for all ages of kids as they will be able to join in at their own level. and also observe what the older kids or adults are saying about and doing with the tadpoles.

Have you ever tried to teach you kids about the Frog Life Cycle? Share your experiences and ideas with other Enfants D’Azur families. I look forward to your comments.

Posted in THINGS TO DO and tagged cote d'azur, hunting, kids activities, tadpole